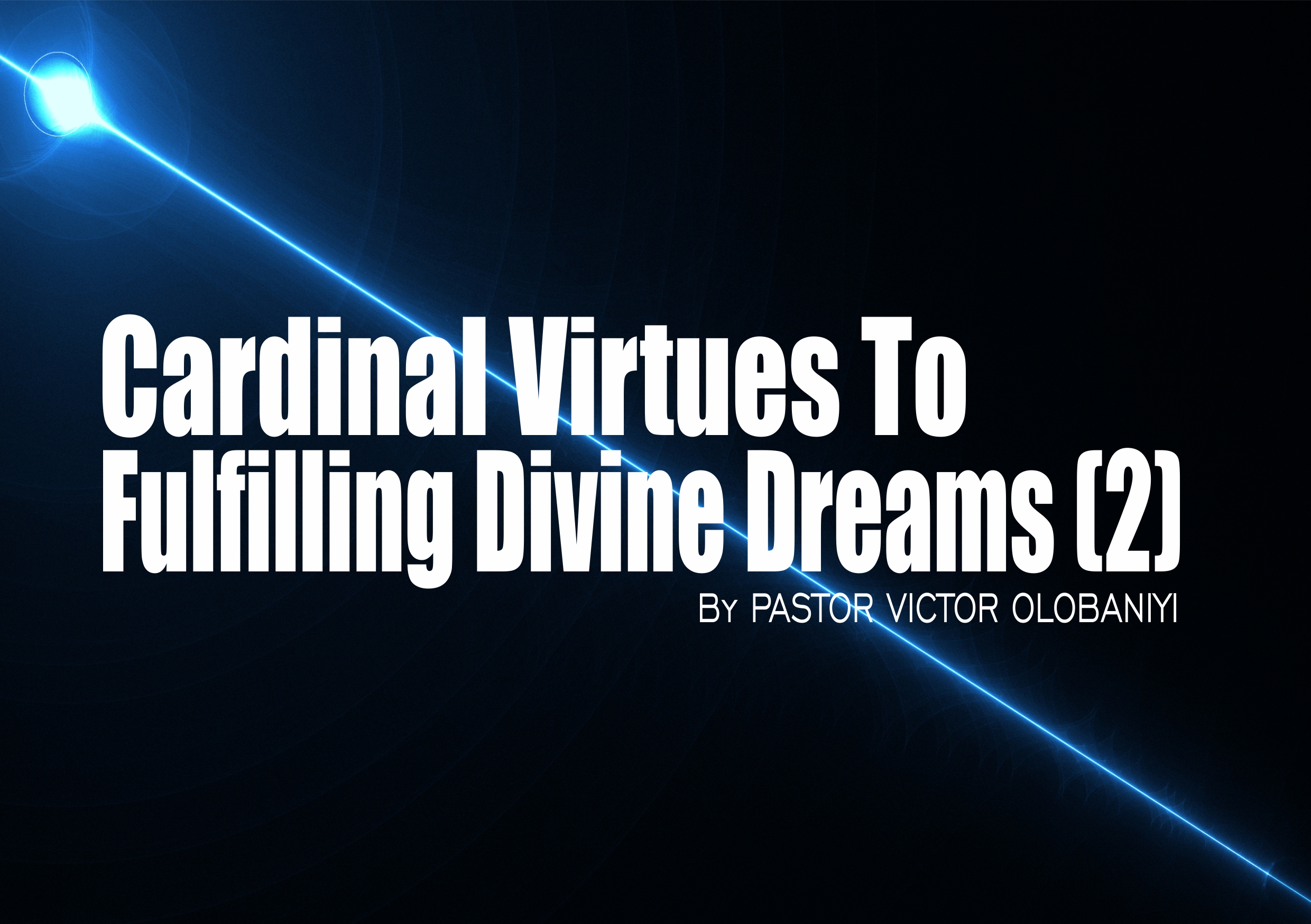 As a continuation of last week message, we are going to be discussing some cardinal virtues that are required to achieving and fulfilling divine dreams.

When God speaks, considered it done from His own side, but it may interest you that it will only come to pass if you concerned agrees with Him, and take the necessary steps that are required to fulfilling that promise or spoken word from the initiator of that dream. As we all know that Faith without work is dead. James 2vs 17.

So, when God gives you a dream, it takes only you to stop the dream, as no other person can stop the dream as it were, because it was meant for you. Romans 8 vs 31.

In the Character of the person, we shall be considering today, which is the anchor Character for the prophetic theme of the month, Joseph.

It may interest you, that Joseph had to possess some cardinal virtues which were key and pivot to him fulfilling his divine dreams. Becoming the prime minister of Egypt at the age of 30. Genesis 41vs 46.

One of these crucial virtues was Righteous living. After been enticed by Potiphar’s wife, to come and sleep with her, Joseph said, ………..how then can I do this great wickedness and sin against God. To buttress that you need to live a righteous life to be able to fulfil divine destiny or dreams, Proverb 14 vs 34 says. Righteousness exalteth a nation: but sin is a reproach to any person.

Another virtue to fulfilling divine dreams and destiny is Diligence, Genesis 37 vs 2, Joseph was diligent in his primary place of assignment of feeding the flock. Proverbs 22 vs 29 confirms that seest thou a man diligent in his business? he shall stand before kings; he shall not stand before mean men.

The third point to mention is Availability. Genesis 37 vs 13. Joseph was available for Israel his father,to be able to send him to his brethren. Your availability to fulfilling your dreams depends largely on your availability for the dream. As you becoming a medical practitioner, you must be available to attend school and sit for the relevant exams.

Fourthly, the importance of Obedience cannot be overemphasised. Genesis 37 vs 14. Joseph obeyed the instruction of his father to go and check on his brethren if it be well with them. Joseph went without any recorded questioning, despite the fact that his brethren are not really his fans. To fulfilling the divine dream you must be obedient to the commandments and directives from the originator of the dreams which is the Almighty God.

The Fifth point and the last cardinal virtue we shall be considering is Perseverance and Patience. Genesis 37 vs 15-17, records the perseverance and patient of Joseph to locating where his brethren’s are so as to deliver the message that his father sent him. if you must fulfil your divine dreams and destiny, the virtue of patience and perseverance in none negotiable.

Paul the Apostle made mention of this in 2 Corinthians 4 vs 8-10.which was further confirmed in Hebrews 12 vs 1.
My prayer is that may the Almighty God help us with all these virtues so that we can fulfil our divine dreams in Jesus mighty name.