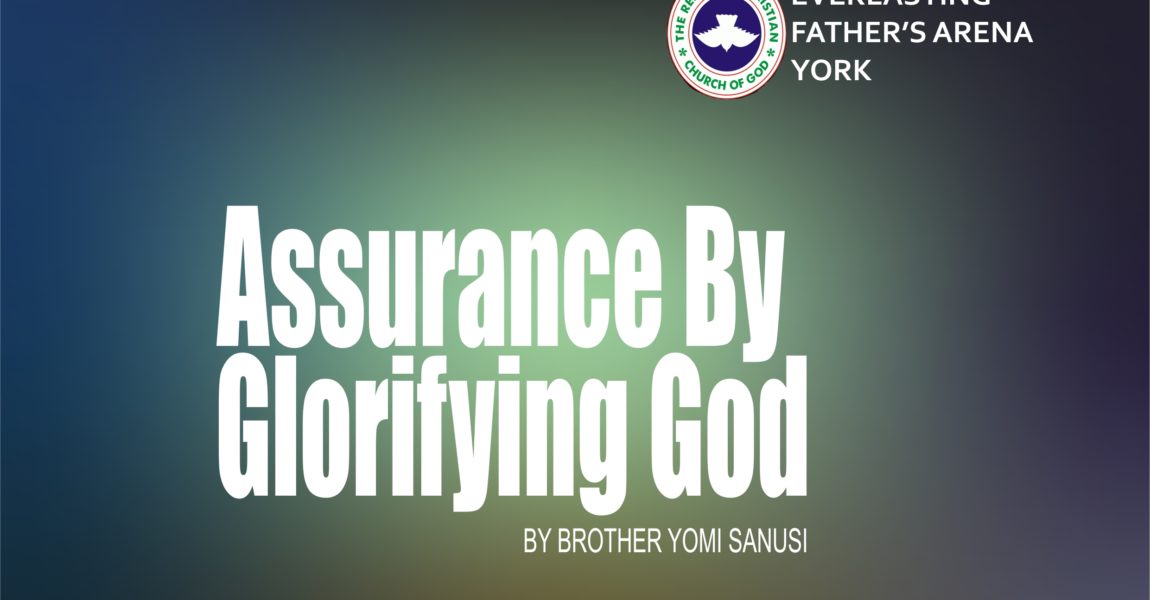 Whilst reflecting further on John 14.13-14 for this month let us consider the background to God’s claims, promises and assurances to us in those verses of scripture.

At the time of this promise, Jesus had a long relationship, meant to be permanent, with his twelve disciples. They had already spent more than three years together. He had been teaching them, taking care of them and answering their questions. They had no doubt he was the Messiah, The Son of God, The Anointed One, and The Lamb of God that would be slaughtered to take away the sin of the world. But they were yet unsure of all the details. They had no idea exactly how his blood would be shed in atonement for not only their sins but of the world including future generations. History was unfolding before their eyes.

The context of his promise and reassurance to them was based on their relationship. Their relationship was about to undergo a change. In fulfilment of His purpose of becoming flesh, Jesus was, in fact, planning to die, be resurrected, and personally take care of spiritual business that would have eternal consequences. Yet he still wanted to maintain the relationship, their zeal for the Kingdom of God, and their focus on preaching the message from God’s heart to everybody.

Jesus’ own prayers were based on relationships and conversations that glorified God.

When he fed the multitude of five thousand in John 6:11 “ And Jesus took the loaves; and when he had given thanks, he distributed ….”. He demonstrated the source of that miracle by starting with thanksgiving to God the Father. He then passed the food to the disciples whom he loved, taught and provided for. They, in turn, passed the food to the multitude upon whom they had compassion that they should not starve. God received the glory. The success of that intervention was astounding, as should be the focus on Jesus’ thanksgiving to our Father in heaven, of whose kingdom he spoke ceaselessly.

John 11.41-44. When Jesus called dead Lazarus back to life, the importance of relationships and all glory going back to God was further highlighted. He lifted up his eyes and started the public prayer saying “Father, I thank thee that thou hast heard me.” He attempted to focus the attention of the audience with the words that followed saying “And I knew that thou hearest me always: but because of the people which stand by I said it, that they may believe that thou hast sent me…..” Then he raised his voice so the dead man buried in his grave may hear Jesus’ instruction. The Bible reports in John 11:43 that “And when he thus had spoken, he cried with a loud voice, Lazarus, come forth.”

To demonstrate Jesus’ relationship with the Father, and to the glory of God, the dead man Lazarus obeyed by coming out of the grave regardless of the hindrance from death and the graveclothes binding his limbs.

There was nothing more important to Jesus than quality relationships, and the certainty that God our heavenly father receives all glory! Even when he stared unimaginable cruelty and corporal punishment and inevitable death in the face, nothing mattered more than his relationship with God, and God receiving glory!! Praying agonisingly in John 17. 1-5, his focus was that through his life, work, pain, mission and current suffering and in spite of everything “be glorified”.

Even prior to arriving at that point everything Jesus said, did or asked others to do or say had always been about God receiving the glory. It was about God being acknowledged as God. His signs, wonders and miracles were based on conversations that can be summarised as “let us glorify God together”.He did not always pray to demonstrate supernatural feats. In demonstrating signs, wonders and miracles Jesus had conversations surrounding the kingdom of God, and then either did something, asked people to do something or both.

From what the Bible described as Jesus’ beginning of miracles in John 2.7-8 where he asked attendants to fill the water-pots with water, and then draw some out; to John 4.50 where he instructed the nobleman that endeavoured to seek help and received the instruction to “go thy way, thy son liveth” – Jesus held conversations that brought glory to God. He even told an impotent man to do what he had never been capable of before in John 5.8 saying “rise, take up thy bed, and walk”. In John 9. 7, He got a man that had never seen anything since birth to participate in glorifying God by making a short journey to the pool. He told him to go and wash the clay and spittle from your eyes. Even others including his neighbours were thus made to participate in giving glory to God. He sought occasion to make God take the glory, making sure others hear his assurance to a grieving Martha that her brother Lazarus would rise again in John11.23. He always sought opportunities to explain that not even impossibilities, nature, science, philosophy or anything yet to be conceived by the heart of man can prevent God from getting all the glory.

God wants to use my life, circumstances and yours to receive the glory due to His name. The context must, however, be taken account of. It is an individual’s relationship with Him that makes God’s promise set out in John 14.13-14 valid, relevant and workable.

You may ask ‘what do I need to do now?’. The basis of the relationship God wants is set out in John 3.16. The starting point is believing in Jesus and the significance of what he did for you. The conversation, an invitation to partake in giving the glory to God demonstrated in John 11.23-27 is not possible without it.

In the course of that conversation, Jesus asked a directly to Martha in verse 26 “Believest thou this?”. He asks you exactly the same question this moment. Like He addressed Martha you are being addressed today: John 11:40 “Jesus saith unto her, Said I not unto thee, that if thou wouldest believe, thou shouldest see the glory of God?”

To have the assurance of answered prayers and glorify God, you and I need that as a starting point. For subsequently Jesus wants to direct you expressly and in John 14:15, “If ye love me, keep my commandments.” Are you there yet? Some things are just impossible before faith in Him and surrender to Him. For then John 14:16 could for you become relevant.

You and I can benefit from the promises of John 14.13-14 and have assurance by glorifying God. However, that depends on your relationship with your maker and the totality of the conversation of your life. In as much as every word and act or Jesus and all of His relationships brought glory to God; whether he knows it or not that is part of the duty of man. Scripturally these remain true, regardless of the totality of individual and collective human knowledge, suffering and known and unknown future. Every individual must make a decision.

If your life has been completely surrendered to Jesus you can have those assurances by glorifying God.