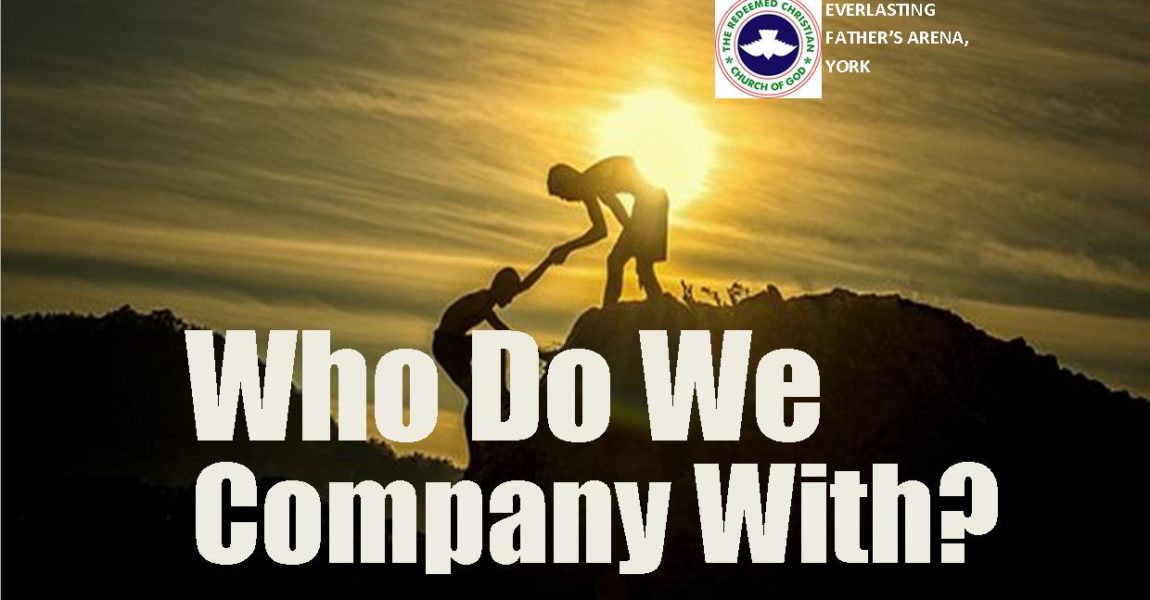 Who Do We Company With? by Deaconess Adebisi Olobaniyi

DeacIn Genesis 38:1-30 we are made to understand that Judah left his brethren.

Genesis 38:1 KJV[1] And it came to pass at that time, that Judah went DOWN from his brethren, and turned in to a certain Adullamite, whose name was Hirah.

Judah made friend with Hirah the Adullamite.2 Corinthians 6:14 KJV[14] Be ye not unequally yoked together with unbelievers: for what fellowship hath righteousness with unrighteousness? and what communion hath light with darkness?

Whenever the Bible refers to someone going down, it usually means far away from God or the things of God. One sin always leads to another, when your spiritual antenna is not sharp to perceive what God is saying, or those around you cannot correct your error because they don’t know any better. Just take a pause and consider the friends you keep, do they fear God, are they believers, are they followers of Christ. That’s a pointer to a lot of things in life, you having good success or sorrow upon sorrow.

He went down from his brethren. From there he married a Canaanite woman, Shua by name. They had three children; two were killed because of their wickedness. Deuteronomy 7:3-4 KJV [3] Neither shalt thou make marriages with them; thy daughter thou shalt not give unto his son, nor his daughter shalt thou take unto thy son. [4] For they will turn away thy son from following me that they may serve other gods: so will the anger of the Lord be kindled against you, and destroy thee suddenly.

We cannot compromise our faith and think everything will be alright. As Christians we have entered into a covenant with God, it might walk for another but you can’t play with your salvation.

The children both died without being fruitful. Nothing to show for all his labours. Tamar the daughter in law played the harlot because of a failed promise. Genesis 38:14-16 KJV [14] And she put her widow’s garments off from her, and covered her with a vail, and wrapped herself, and sat in an open place, which is by the way to Timnath; for she saw that Shelah was grown, and she was not given unto him to wife. [15] When Judah saw her, he thought her to be an harlot; because she had covered her face. [16] And he turned unto her by the way, and said, Go to, I pray thee, let me come in unto thee; (for he knew not that she was his daughter in law.) And she said, What wilt thou give me, that thou mayest come in unto me?

Why would Judah promise and not keep it?

His wife later died and was comforted Genesis 38:12 KJV [12] And in process of time the daughter of Shuah Judah’s wife died; and Judah was comforted and went up unto his sheepshearers to Timnath, he and his friend Hirah the Adullamite.

The daughter in law was able to play the harlot to Judah mainly because; his spiritual antenna is not working well and those around him, Hirah the Adullamite (unbeliever). He was with his best friend Hirah when he went in and slept with his daughter in law. Judah wanted to throw the ﬁrst stone at Tamar when he found out she was pregnant. Those that live in glass house should not through stone.

Genesis 38:18 KJV [18] And he said, What pledge shall I give thee? And she said, Thy signet, and thy bracelets, and thy staff that is in thine hand. And he gave it her, and came in unto her, and she conceived by him.

He blindly gave away:

Without being sensitive enough, that the lady was asking for too much, after all, he thought, I will give a kid later. Judah committed sacrilege slept with his daughter in law. Genesis 38:20 KJV [20] And Judah sent the kid by the hand of his friend the Adullamite, to receive his pledge from the woman’s hand: but he found her not. It was still this same friend of his he sent to redeem the pledge with the harlot, birds of the same feather ﬂock together. Genesis 38:23 KJV [23] And Judah said, Let her take it to her, lest we be shamed: behold, I sent this kid, and thou hast not found her.

Tamar had twins by his father in law; from birth, the baby had a name given that was not right because he broke forth out before his brother. Who do we company with, who is our conﬁdant, do they frown at evil, or are they happy to play along. Check and take stock.

Who’s side are you on, the Lord’s side or the devil’s? Chose God that you may live. Give your life to Jesus He is a true friend; He will not lead you astray nor forsake you.

Just pray these prayers as the Lord make us free in Jesus name.