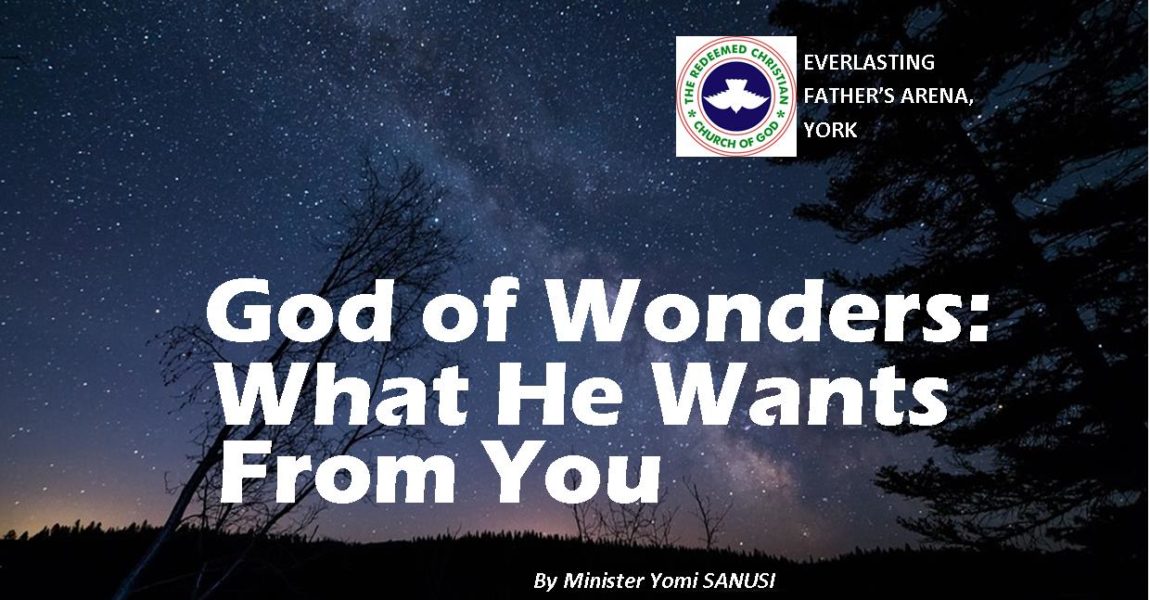 God of Wonders: What He Wants From You! by Minister Yomi Sanusi

Our study this month has been focussed on certain aspects of the God of wonders. The God who through incredible feats of greatness, authority and power fulfilled His promises and delivered a captive nation held up in slavery at the hands of harsh taskmasters that resisted Him onto their own eventual destruction. Those endeared to the heart of God can enjoy His protection and benevolence, regardless of the difficulty they have to confront. The greatness, authority and power of God of wonders continue; and ultimately see them through.

We have examined how the wonders performed by God usually had contrasting consequences, depending on responses to the instruction and authority of God. The administrators of Egypt the then most powerful country together with its inhabitants, who subscribed to and partook of the persistently derogatory and inhumane treatment of a people beholden to Jehovah, bore the full force of the plagues.

The nature and execution of those consequences continue to baffle till today. The consequences of the same acts of God for the enslaved were entirely different: liberation, vindication and a new purpose to walk with and serve their God. It remains true today that for people affiliated to God, called by His name, redeemed by faith in Jesus Christ, victory is assured. Their enemies are on notice, as God has not diminished in power or intent.

The intervention of God shall be surprising, perhaps strange and will be met with astonishment and awe. It shall be marvellous for all, overpowering and perilous for those who do not depend on or have elected to oppose the sacrifice of Jesus Christ the Messiah.

Who really is this God of wonders, and what does he want?

Revelation 1:5 teaches and advice us that Jesus Christ, the faithful witness and the first begotten of the dead is the prince of the kings of the earth. In all of His power and awesomeness, he decided to love us, and he washed us from our sins in his own blood. He devised a crafty, unstoppable, impeccable remedy for man’s estrangement from God.

About him, the scriptures have much to say, especially of what the only appropriate consequence should be of knowledge of what God has done.

Psalm 150:2,6: “Praise him for his mighty acts: praise him according to his excellent greatness. Let everything that hath breath praise the Lord. Praise ye the Lord.” We do well to learn from Psalm 148. The heavens, heights, hosts of heaven, all known and even as yet unknown nature will praise God. At His commandment, they were created. His decrees or word and intent and path cannot be averted or denied.

So much so that neither beasts nor peoples, royalties nor judges, old nor young, present or past, can resist, oppose or escape Him! God himself spoke and declares in Isaiah 45:12 “I have made the earth, and created man upon it: I, even my hands, have stretched out the heavens, and all their host have I commanded.” Isaiah 45:18 “For thus saith the Lord that created the heavens; God himself that formed the earth and made it; he hath established it, he created it not in vain, he formed it to be inhabited: I am the Lord, and there is none else.”

He said further of Himself among many things in Rev1:8 “I am Alpha and Omega, the beginning and the ending, saith the Lord, which is, and which was, and which is to come, The Almighty”. He was forthright in declaring His interest and the true desire of

His heart in Revelation 3:20 “Behold, I stand at the door, and knock: if any man hears my voice, and open the door, I will come in to him and will sup with him, and he with me.”

The God of wonders is primarily concerned about your response to His most passionate quest. He covets entry into your heart, there to perpetually reside and establish permanence. What will your response be? John 3:16.

The sermon, God of Wonders: What He Wants From You! by Minister Yomi Sanusi, was delivered on September 23, 2018.